Invisible Hand of the Market and Other Turbo Capitalist BS 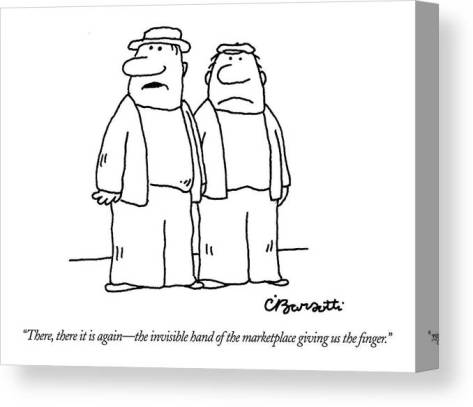 Turbo capitalists are fond of quoting Adam Smith’s “Wealth of Nations,” while failing to read all of what he said. They cherry pick his “invisible hand” of the marketplace as sort of a transcendent religious doctrine proving that maximum profit at any cost benefits everyone. “Don’t try to regulate business! Don’t mess with the invisible hand of the market or it’ll slap you upside the head!!”

But no, Adam Smith never said that. Smith was a good guy and naively thought all businessmen were probably good guys like himself. That, of course, is not true. He also wrote “The Theory of Moral Sentiments,” about human empathy.  Gordon “Greed is Good” Gecko never read that one. The idea that rich businessmen just ARE virtuous and need no restraints is absurd. According to the Federalist Papers, “If men were angels, no government would be necessary.” But, you may have noticed, men are not angels.

I’ve even heard economists who did notice Smith’s other book, try to explain it away. “Oh, Smith didn’t mean what he said in that one. He meant every man for himself and the devil take the hindmost.” Well, if he lied in that book, how do you know he didn’t lie in the Wealth of Nations? I don’t think he lied in either one, maximum profit alone is unbalanced. I think Smith would agree that the best result comes from individual initiative balanced by consideration for the common welfare.

It should be obvious. The turbo capitalist claims he’s a self-made man, but he didn’t make himself. He didn’t build all the roads, communication equipment and bridges he used. He has to live in this world, too, and needs other human beings to do so. He needs to pay his share and treat those workers like he’d want to be treated, or the whole thing will crash and burn in the long run.

Here are a few excerpts from Moral Sentiments. Next time you hear “invisible hand,” self-made man” and “deregulation,” share these.

“However selfish soever man may be supposed, there are evidently some principles in his nature which interest him in the fortune of others and render their happiness necessary to him, though he derives nothing from it other than the pleasure of seeing it.”

“He is sensible that his own interest is connected with the prosperity of society, and that the happiness, perhaps the preservation of his existence, depends upon it’s preservation. Every appearance of injustice alarms him and he runs if I may say so to stop the progress of what, if allowed to go on, would quickly put an end to everything that is dear to him.”

Je' is a writer, artist, and stand up philosopher. She founded and directed two non-profit organizations for disadvantaged children and their families, served as a missionary for three years, is the author of several books and teaches art. Twitter: @jeczaja FB: https://www.facebook.com/grannysavage Amazon Author page: http://www.amazon.com/-/e/B00IU4RWKE
View all posts by Je' Czaja aka Granny Savage »
« It’s O.K. To Be Sad if Your Friend Died
What Does Donald Trump Have in Common with Charles Manson? »