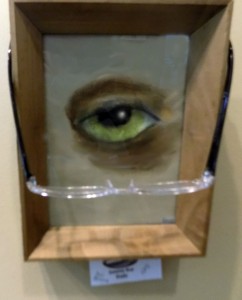 I teach at the Suwannee River Studio as a volunteer and one day launched into a mini-lecture about being serious artists. Then I noticed two members were making something under the table. It turned out they were sculpting spiders to scare me with, so I gave up on my serious artist speech.

Nothing wrong with a sense of humor, right? (Except spiders aren’t funny, guys!) Take Anne; she is very prim and proper. She was raised as a high class woman in South Carolina. One day, as she sat working on her pastels, I went out to water the butterfly garden. OMG, a snake was in the bushes! I jumped back and studied it and it turned out to be a rubber snake. When I went back inside, Miss Priss was laughing. She watched each of us jump in turn  when we saw the snake and enjoyed it immensely.

I gave a demo on request on rendering eyes. Bill, who is 97 years old and sharp as a tack, made the painting above. Joann makes…constructions? Mixed up media? She includes real quail eggs and touchable textures. We have a show currently and when the curator asked me what our theme was, I told him, “Insanity.” But then it’s O.K. to be a little crazy, as long as you don’t hurt anybody, right?

But could the fake spiders and snakes hurt anybody? They told me even real spiders are harmless, to which I reply:

Nothing is harmless if it makes you jump off a cliff.

Je' is a writer, artist, and stand up philosopher. She founded and directed two non-profit organizations for disadvantaged children and their families, served as a missionary for three years, is the author of several books and teaches art. Twitter: @jeczaja FB: https://www.facebook.com/grannysavage Amazon Author page: http://www.amazon.com/-/e/B00IU4RWKE
View all posts by Je' Czaja aka Granny Savage »
« Janice the 76 year-old drug addict
The Holy Fool »