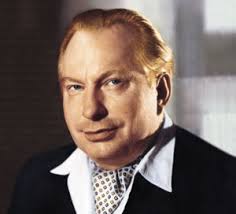 It boggles the mind that good, intelligent people were sucked in by Hubbard’s con. It boggles the mind, but it shouldn’t. If you found a self-help therapy that could also help others, stop wars, stomp out mental illness and psychosomatic diseases, wouldn’t you go for it? Maybe, you reply, but when it got absurdly expensive, mind-controlling and crushed families and my very soul, I’d quit.

One escaped scientologist said, “At least I now know I can never be conned again.” “No,” replied his fellow escapee, “that’s the wrong lesson, you need to learn that you CAN be conned and watch out.” I think most of us can be conned by a really good liar. Ever know a really good liar? A charming, funny, charismatic liar? Did you believe him? You did if he was a really good liar and you’re a decent person, because you can’t imagine anyone telling such outrageous lies with nary a twitch of an eyelid.

Hubbard was a spoiled, entitled brat who grew up into a big, fat liar. He lied even when the truth wouldn’t hurt him. He may have eventually believed his own lies, like when he wrote the Navy asking for all the medals he claimed to have earned. He never earned them and he knew it. His Navy career was shameful and he was relieved of command twice for incredibly stupid stunts. Then he pestered them for disability for years for his war wounds-which he had never received.

You can read a very thorough and well-researched biography of Hubbard, “Barefaced Messiah” for free online. http://avalonlibrary.net/ebooks/Russell%20Miller%20-%20Bare-faced%20Messiah.pdf It explains a lot, but mostly illustrates Hannah Arendt’s observation on the banality of evil. Evil is not swashbuckling and exciting; it’s as common, putrid and dull as the manure pile on my daddy’s farm.

Je' is a writer, artist, and stand up philosopher. She founded and directed two non-profit organizations for disadvantaged children and their families, served as a missionary for three years, is the author of several books and teaches art. Twitter: @jeczaja FB: https://www.facebook.com/grannysavage Amazon Author page: http://www.amazon.com/-/e/B00IU4RWKE
View all posts by Je' Czaja aka Granny Savage »
« ART 101
Suwannee River Fairies »