So What is Democracy? 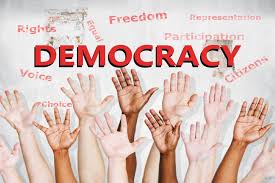 We love the word “democracy,” which literally means rule by the demos, the common people of a city-state. That was the original meaning, but meanings change gradually and now it means a government in which the views of the common people are considered in the decision-making process.

Where does that take place? It took place in ancient times, when tribes ruled themselves for millenia; it’s part of human nature to want that, like we want fairness, or peace and safety. The concept persisted into 1647 when Colonel Rainsborough said in the Putney Debates during the English Civil War,

“I think that the poorest he that is in England hath a life to live, as the greatest he”

Not a bad summary of the idea, right?-even though women were not included in either the poorest or greatest “he.” They were not included in the Greek city-state democracy, either. Neither were the 30% of residents in Athens who were slaves. There’s your so-called cradle of democracy. Yet the ideal lives on, as strong as ever.

These days “democracy” is thrown around as a propaganda weapon, opposed to “authoritarian” or even “populist.” Democracy=good, populist=bad though ‘populist’ seems closer to the common man than the corporate toadies from whom we must choose.

Nations that hold elections are said to be democracies. But that’s bogus; Hitler was elected and the Bolsheviks held elections. The U.S. holds elections in which a candidate becomes the voice of the common man-theoretically. The last election showed the absurdity: would you prefer a s**t sandwich or a steaming bowl of s**t soup? Pick one or you are against democracy!

At the moment, anti-EU parties are rising in Europe. Is this a battle between democracy (EU) and authoritarianism (opponents of EU?) NO. It is a battle between a lumbering, centralized bureaucracy (EU) and the ancient tribal ideal of self-rule, which can, taken to extremes, lead to it’s own set of abuses. The EU wants a world united and run from Brussels, where technocrats pass out dictats to be obeyed by the unwashed masses, you know, for their own good.

I didn’t think much about the EU until I read a tiny story about French cheeses makers. Apparently, a couple hundred cheese makers plied their craft on small farms, which resulted in many local variations of cheese. Maybe some cheese was made in unsanitary conditions! Can’t have that! So EU rules were handed down which effectively shut down the artisan cheese makers, For the good of the people, all of humankind should be homogenized in a stainless steel and porcelain world. Therefore, all cheese must meet EU standards. I felt sad. Imagine all the tastes and variations of cheeses around France. Were some unsanitary? Maybe, but let the buyer beware, I say. The EU reminds me of the Bolshevik bureaucracy during it’s decades of decline. When has a bureaucracy ever reformed itself before it was too late?

The Eurobarometer, a periodical survey of EU citizens, has been pointing out for many years that a majority of EU citizens have the impression that their views are not being considered in the decision-making process.

EU, that is the essence of democracy and you are failing and must fail. You are ignoring human nature for some nebulous ‘better world’ and exactly why do you feel so superior that you are qualified to define that better world? For example, humans do not want massive numbers of migrants who spurn the host country’s culture. It feels like an invasion, a conquering army of foreigners. This is not a figment of the imagination, a conquering army of foreign invaders has crossed thousands of borders throughout history with dire results for the native inhabitants.

Je' is a writer, artist, and stand up philosopher. She founded and directed two non-profit organizations for disadvantaged children and their families, served as a missionary for three years, is the author of several books and teaches art. Twitter: @jeczaja FB: https://www.facebook.com/grannysavage Amazon Author page: http://www.amazon.com/-/e/B00IU4RWKE
View all posts by Je' Czaja aka Granny Savage »
« Leaders: Male and Female
The Deadliest Threat to a Nation »