Pope Francis is the real thing 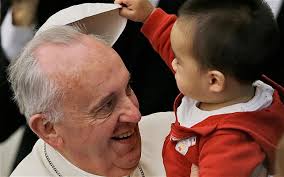 What’s this on your head? I’ll take it off for you…

I attended a top-notch Catholic high school on a scholarship. Our teachers were nuns with PhD’s, some Jesuits with advanced degrees and my Latin IV teacher was a Rhodes scholar.

When people say Christians are anti-science or anti-education, I have to laugh. We had the best-equipped science lab I have ever seen in a school and they taught the Theory of Evolution as well as the Creation story (different classes) and no one saw any conflict.

When I read the conspiracy theories about Jesuits as the evil agents of the Anti-Christ, that doesn’t wash either. That some Jesuits did some shady things I do not doubt, but the Jesuits I knew were purveyors of excellence and totally sold out to their calling, which is usually education.

Pope Francis is a Jesuit, which immediately threw him, for some, into the Whore of Babylon camp. Baloney. He says things that people really like, as one Twitter friend said, “I love everything Pope says and does-and I’m an atheist (so far.) and “I sometimes wonder if he is a mole.”

I think that means “Pope Francis is too good to be true.” But I think Pope Francis is the real thing, like Jesus (Jesuit=Society of Jesus) and being like Jesus is as shocking to us humans now as it was 2,000 years ago. The Pope recently addressed the EU Parliament and rebuked them for treating humans like cogs in a machine, to be disposed of when no longer useful. Stop that, he told them, and create jobs so all people can have a decent life and raise their families.

The Good News is that human beings have unimaginable value, that God loves them and wants them to flourish right here on earth and forever.

Oh, and God expects us to love one another and to show it by our actions. Not on Sunday, not even for a few hours a week-but all the time, constantly. It is not a list of dogmas to assent to, but a way to live.

“Christianity has not been tried and found wanting. It has been found difficult and not tried.” G.K. Chesterton

Je' is a writer, artist, and stand up philosopher. She founded and directed two non-profit organizations for disadvantaged children and their families, served as a missionary for three years, is the author of several books and teaches art. Twitter: @jeczaja FB: https://www.facebook.com/grannysavage Amazon Author page: http://www.amazon.com/-/e/B00IU4RWKE
View all posts by Je' Czaja aka Granny Savage »
« Art Versus Politics
The Legend of Jack Napkin »