The art of seeing through…to what is real

Posted by Je' Czaja aka Granny Savage ⋅ November 21, 2014 ⋅ Leave a comment
Filed Under  art-creativity, fractals, mathematics of infinity, turbulence, wheel of time, wheel within a wheel

DO NOT READ THIS IF YOU ARE STRESSED RIGHT NOW. It’s kind of deep. 🙂

So math and I could just leave each other alone, if only I had never encountered fractals, a kinky sort of geometry (?) that calculates the beautiful patterns found in nature; the thumbprint of God, the order behind the seeming chaos in the universe.

Now I see fractals everywhere-in the repeating patterns of leaf veins, mountain ranges from satellite photos, neural pathways in our brains! There is order in the universe, I tell you…maybe I could figure it out. If only I could do the math. 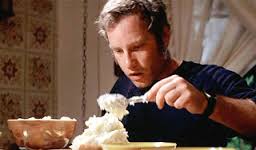 I feel like Richard Dreyfus in Close Encounters of the Third Kind, molding his mashed potatoes into a mountain shape and insisting, “This MEANS something,” much to the alarm of his family. It does mean something, but I can’t do the math.

But then Vincent van Gogh couldn’t do the math, either, and he painted turbulence, something scientists have recently discovered that is “real.” Van Gogh saw through; he saw turbulence a long time ago, as in his famous work, Starry Night.

The stars are spinning, like the Hindu wheel of time or the mysterious wheel within a wheel Ezekiel saw in a vision.

But maybe I should leave it alone…the geniuses who worked on the mathematics of infinity all went mad and Van Gogh was in a mental institution when he painted Starry Night.

Maybe what we think of as opposites, math vs art, science vs religion-maybe they aren’t opposites at all. Maybe they are spokes on a slowly spinning wheel?

Hats off to you mathematicians and to you creative types>>>

Maybe we’re not as crazy as people sometimes think we are. 🙂

Je' is a writer, artist, and stand up philosopher. She founded and directed two non-profit organizations for disadvantaged children and their families, served as a missionary for three years, is the author of several books and teaches art. Twitter: @jeczaja FB: https://www.facebook.com/grannysavage Amazon Author page: http://www.amazon.com/-/e/B00IU4RWKE
View all posts by Je' Czaja aka Granny Savage »
« Being Poor in America
Anything you think can and will be used against you »