What are clowns so dang creepy?

Were clowns always creepy or did they become creepy when they were turned into stars of horror movies? Is there something just inherently creepy about painted white faces with big fake red lips drawn into big fake smiles?

I never liked them since I first saw some at a circus doing mean things to each other. Of course, this was just slapstick comedy and the adults laughed, but my five year-old brow crinkled in concentration: “There is something wrong with those guys,” I thought, “But I can’t quite put my finger on it.”

But most people, I think, like clowns. Then again, not all. I once took the teen’s clown ministry out to a rough neighborhood to pass out flyers for a fun event we were hosting, but apparently the movie “It” had recently been circulating there. 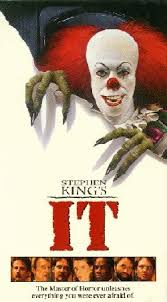 Teen clown: “Knock, knock-hello, I’m passing out flyers for the ….”

Instead of happy children collecting candy, as the teens had envisioned, frightened little faces peered out from behind curtains. One family even released their pit bull, which chased the pastor’s daughter back to her car.

In the end, lots of kids came to the event anyway and several even let the “clowns” paint their faces. They were leery, though.

I think it has to do with presenting a false face to other people. Humans are very sensitive to faces and facial expressions, starting at birth.

And have you noticed that people seem strangely hostile to mimes, perhaps for the same reason? Rationally, I can admire the stuff they do, but when I encountered one in New York City (and tried to admire the stuff he was doing) I was aware that some part of me wanted nothing more than to strangle him.

Consciously I thought, “Well done, it really does look like you are trapped in a glass box.” But from deep in my brain came, “There is something wrong with this guy…”

“Don’t move,” said Sprockett. “Mimes don’t generally attack unless they are threatened.”
― Jasper Fforde One of Our Thursdays Is Missing

Je' is a writer, artist, and stand up philosopher. She founded and directed two non-profit organizations for disadvantaged children and their families, served as a missionary for three years, is the author of several books and teaches art. Twitter: @jeczaja FB: https://www.facebook.com/grannysavage Amazon Author page: http://www.amazon.com/-/e/B00IU4RWKE
View all posts by Je' Czaja aka Granny Savage »
« Funny the things we remember…
Halloween in the old days »

2 thoughts on “What are clowns so dang creepy?”