Nothing I could do…not my business…serves her right. 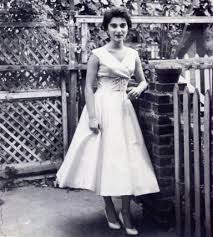 From the Truth about Kitty Genovese:

“Of course I heard the screams,” one woman told the Long Island Star-Journal. “But there was nothing I could do. I was afraid…”

“That was none of my business. I attend to my own affairs.”

“At one point I thought maybe a girl was being raped – but if she was out alone at that hour, it served her right.”

In 1964 a young woman in a middle-class neighborhood in New York named Kitty Genovese was stabbed to death in public and no one helped her, or even called the police until thirty minutes later. Her case is used to illustrate a disturbing tendency humans have to do nothing when others are present, on the theory that someone else might do something, so the individual is not responsible. 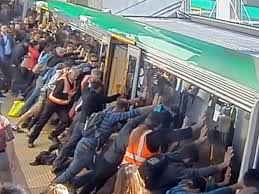 When a crowd acted together to do the heroic thing. Australians push a train over to free woman’s leg

Diffusion of responsibility is why decent people employed by Enron, for example, could defraud their fellow citizens with scarcely a twinge of conscience, why decent young German farmhands could beat concentration camp “slackers,” why men in fine suits can impose genocidal austerity measures on whole populations, why Israeli Defense Force soldiers can herd Palestinians into a warehouse to be bombed. They are ‘following orders,” “If I don’t do it, someone else will,” “It is necessary to achieve a higher good.”

I study these people intensely, perhaps for fear that when it came down to brass tacks, I also would be an abject moral failure. I see glimmers of hope: a political aide asking himself, “Wait, is this even legal?” (1) German citizens questioning the burning of a synagogue (2) IDF soldiers agonizing about their commander luring Palestinian children close in order to shoot off their legs. (3) 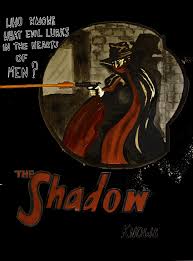 Who knows what evil lurks in the hearts of men? The Shadow knows…

What can we do? We can stand up for what we know is right. We can insist on telling the truth. We can contact our representatives, we can volunteer at a local charity, we can gather a little bag of toothpaste, shampoo, soap, and deodorant and give that little bag to the local homeless shelter or juvenile detention center.

There IS something you can do, it IS your business and the victims are not to blame, the perpetrators are.

1) Casino Jack and the United States of Money

3). Breaking the Silence: Israeli Soldiers Talk about the Occupied Territories

Je' is a writer, artist, and stand up philosopher. She founded and directed two non-profit organizations for disadvantaged children and their families, served as a missionary for three years, is the author of several books and teaches art. Twitter: @jeczaja FB: https://www.facebook.com/grannysavage Amazon Author page: http://www.amazon.com/-/e/B00IU4RWKE
View all posts by Je' Czaja aka Granny Savage »
« Hey-We Found You a Boyfriend
Can Ethics and Morality be Taught? »