The magical, mystical attraction of guns 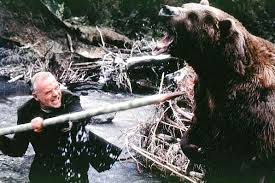 “Americans have a God-given right to carry guns” “Like” if you agree.

Of course, the facebook post got about 300,000 “Likes,” causing me to wonder, yet again, about the quality of the cognitive machinery grinding away between the ears of my fellow Americans.

First of all, the “God-given” right refers to the second amendment of the US Constitution, which was not written by God. Imagine Jefferson or Franklin’s horror if they thought the document would one day be regarded as holy writ!

The warmest friends to…the Constitution, do not contend that it is free from imperfections; but these were not to be avoided, and they are convinced if evils are likely to flow from them, that the remedy must come thereafter; because, in the present moment it is not to be obtained.-George Washington

So the rights listed in the Constitution are the work of humans, obviously. Now, Jefferson did claim in the Declaration of Independence that the Creator made all men equal in the following rights: life, liberty and the pursuit of happiness. He said it was self-evident, i.e. I don’t have to prove this. That is Jefferson’s truth-claim, take it or leave it, but do not confuse it with the Constitution.

Unless…maybe…you’re willing to take a trip in the Wayback Machine?

Wayback, lets say a X-hundred thousand years ago, someone figured out that to kill wild game, you didn’t have to jump on an animal and bash it in the head with a rock. That is dangerous! You could get a hoof in the face or a horn in the groin. No, you could make a pointy stick and kill at a distance. You could tie a stone point to your stick and kill even better at a distance.

You could propel an arrow from a bow and kill at an even greater distance. Clever little boogers, our ancestors. Our ancestors rightly judged that this was a godlike, magical power, the power to kill at a distance without risking your own hide. They sometimes named their weapons and sometimes offered them as a sacrifice to the spirits of the lakes. Excalibur, for example,  draws on these ancient stories.

What is a gun? It is simply a tool for killing at a distance. Did God give us the right to carry such a tool? Well, he gave our ancestors the clever brains to figure out how to do this, so you could say “yes” on that basis. He even gave our recent ancestors the clever brains to invent the ultimate godlike killing-at-a-distance, the nuclear bomb. Do we therefore have the right to nuclear weapons?

When we say, “I have a God-given right to carry a gun,” what we are really saying is

“I insist on possessing the power to kill at a distance.”

Je' is a writer, artist, and stand up philosopher. She founded and directed two non-profit organizations for disadvantaged children and their families, served as a missionary for three years, is the author of several books and teaches art. Twitter: @jeczaja FB: https://www.facebook.com/grannysavage Amazon Author page: http://www.amazon.com/-/e/B00IU4RWKE
View all posts by Je' Czaja aka Granny Savage »
« The Three Weirdos: For those who don’t quite fit in
Plant a tree under whose shade you will never sit »

2 thoughts on “The magical, mystical attraction of guns”