The Lord of the Beasts-Chapter Two

Excerpt from latest book, available here $8.99 All chapters will be posted.

Lord of the Beasts

“Relax, Colban,” said the Lord. “I always knew your thoughts. Yet I have brought you here. I did not kill you. Now tell, me, what is it you really want?”

Colban found that he could not lie to a being that already knew his thoughts and though he was considered to be not only brave but an unusually honest man, he now found it hard to say any words at all. What did he really want and why was that such a hard question? 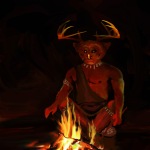 Except for water dripping from the cave ceiling and the sizzle of the fire, the cave was silent. The Lord waited.

“What things do you want to know?” the Lord asked.

“Things…things about you, and about me-where did I come from, why am I here, where am I going?” Colban asked.

“Ah, the Big Things,” said the Lord, removing the owl mask with the antlers. Underneath was a kind and handsome face, a face just like a man’s face. “Sometimes people just want to know where the herds are feeding.”

“But I thought…” Colban said.

“You thought I had an owl head and antlers, as your priest wears during the ceremonies,” the Lord said.

“If it makes you feel better, I will put them back on,” offered the Lord of the Beasts, lifting the head dress.

“No, I want to know about you-what you really are,” said Colban.

“Colban, do you want to know about me?” the Lord asked gently. “Your priest can tell you about me.”

“Is that what you really want?” the Lord asked.

And Colban realized that he did.

“Odo! Come!” called out the Lord of the Beasts. Out of the shadows walked a tall, strong horse the color of rain clouds. He stopped by his master. “Will you ride with me then?” asked the Lord. “We can ride on the back of the horse together.”

Colban had only ever hunted horses for food, but the thought of riding on one was exciting-to borrow the strength of the fleet horse and such a mighty horse as this. “Yes, I will ride with you,” said Colban.

“You can only ride with me if you are willing to become a child again,” the Lord said.

“But why? The horse is big and strong and can carry two men.” Colban asked. The Lord did not answer.

“If I become a child again, will I forget being a man?” asked Colban.

“No, you will have your man’s head, but a child’s heart,” answered the Lord.

“Can I change back later if I want?”

“Then, yes, I will become a child again,” Colban finally said. “So be it,” said the Lord and Colban felt a tingling and was suddenly small; not only small but full of energy and curiosity, and eager to ride a rain cloud horse with the Lord of the Beasts.

The Lord stood and said “follow me” and both the horse and the boy followed him toward the mouth of the cave. The sun was just setting over the distant hills and the valley was bathed with its warm glow.

“It is beautiful, is it not?” the Lord said quietly.

“Yes,” Colban answered. They both stood and watched as the sky changed from gold to pink and purple. “Well, we’d better get started,” the Lord finally said, vaulting onto Odo’s back. He reached down for the little boy and swung him up behind him on the horse. He was so high off the ground! The horse’s back was broad and warm and his mane blew gently in the first breezes of the evening. “Hold on,” the Lord said.

In response to some invisible signal, Odo moved forward, picking his way among the rocks until he reached the edge of a cliff. “Are you holding on?” the Lord asked, a smile in his voice. “Yes,” Colban answered. He felt Odo’s muscles tense beneath him and then the horse vaulted over the cliff and up, up over the valley.

His stomach fluttered when he looked down, but then he burst out laughing.

“You are not afraid?” the Lord asked. In his head, Colban thought he should be afraid, but he said, “No. This is so…fun! “And that is why you have to become a little child to ride with me,” the Lord replied.

Je' is a writer, artist, and stand up philosopher. She founded and directed two non-profit organizations for disadvantaged children and their families, served as a missionary for three years, is the author of several books and teaches art. Twitter: @jeczaja FB: https://www.facebook.com/grannysavage Amazon Author page: http://www.amazon.com/-/e/B00IU4RWKE
View all posts by Je' Czaja aka Granny Savage »
« Neanderthals-Looking Better Every Day
Are you a Lawyer, a Thinker, or a Kokopelli? »