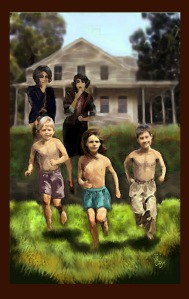 Supposedly the 1950’s was the Golden Age of America to which we should all return. I grew up in the 1950’s and didn’t know I was living in a Golden Age, much like most folks don’t realize they are living through the fall of their empire as it crumbles around them.

This painting is for the next volume of the Magic Barn, which is sort of a picture book for grownups, with short, true stories and original paintings.

It depicts a scene from my wild childhood when my aunties saw me running around shirtless and with uncombed hair. They were scandalized and had a “good talk” with my mom, after which I had to wear shirts and braids. Ugh.

In the 1950’s people were obsessed with conformity. If a person was not just like everyone else they were maladjusted and various therapies would be applied. You were supposed to adjust to society as it was, look like you were supposed to look, do what you were supposed to do and not ask questions. 40-50,000 Americans who didn’t fit the mold were given lobotomies to make them better adjusted.

Ah, the sock hops, the corner drug store where you could sip a root beer float with the other well-adjusted kids. Of course, it would take years of struggle and some deaths before black people could sit at that drug store counter. As Martin Luther King said,

As I painted “Wild and Free” I thought of Malcomb, my first grade classmate, that red-haired Irish handful who was to grow up and die in Vietnam.

We stopped conforming in the 1960’s; nonconformity had become a matter of life and death. Finger-waggers and hand-wringers think America was destroyed in the 1960’s when the young people rebelled.

They want to go back to the 1950’s when we were so much more well-adjusted.

Je' is a writer, artist, and stand up philosopher. She founded and directed two non-profit organizations for disadvantaged children and their families, served as a missionary for three years, is the author of several books and teaches art. Twitter: @jeczaja FB: https://www.facebook.com/grannysavage Amazon Author page: http://www.amazon.com/-/e/B00IU4RWKE
View all posts by Je' Czaja aka Granny Savage »
« The Death of White America and what to do about it
Beyond Capitalism vs Communism: Modern Money Theory »