The Ugly Side of Private Property 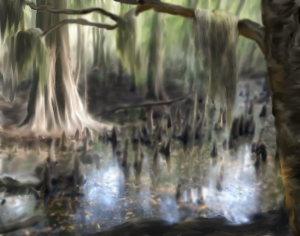 Note: The painting “No Trespassing” was made from the last photo I took on my former hiking grounds. It was rather an ugly scene, literally and figuratively.

For most of human history land was not owned by anyone in particular; it belonged to the tribe; or more accurately, the tribe belonged to it. The bones of ancestors were buried in the same earth from which everything necessary for life-food, water and shelter was provided.

“What is this you call property? It cannot be the earth, for the land is our mother, nourishing all her children, beasts, birds, fish and all men. The woods, the streams, everything on it belongs to everybody and is for the use of all. How can one man say it belongs only to him?” –Massasoit

“My reason teaches me that land cannot be sold. The Great Spirit gave it to his children to live upon. So long as they occupy and cultivate it, they have a right to the soil. Nothing can be sold but such things as can be carried away” –Black Hawk

Of course, when the Native Americans ran up against the English colonists, we know what happened. Private property was the foundation of English law and when the elite landowners no longer needed the surplus human beings, they shipped them off to colonies. Naturally the colonists regarded land ownership as very important. When the USA was founded only (white, male) landowners were allowed to vote. Otherwise, they reasoned, the landless would vote themselves some land.

When I was thrown off my hiking grounds yet again today, I thought about what the man in the pickup said. I told him I had had permission from the patriarch of the family and he told me rather snottily, that “Well, Mr. Gene is dead.” Interesting; then we do not really own private property, we just lease it for life. Pickup man also told me to get out, because, “You don’t own it, I do.”

Pickup man is correct. He also has a lifetime lease on the property and will pass it on to his chosen heirs. Pickup man is a building contractor and no doubt plans to hold onto the property, valued at half a million dollars, (I looked it up in the tax records) until market conditions improve and then he will build homes and sell them. Meanwhile he gets a huge tax break for maintaining a “conservation zone.” Since there are no stipulations in the conservation zone laws about actually conserving the land, i.e. refraining from dumping stoves and refrigerators and other nasty trash on it, Pickup man is handling his inheritance within the law. Note that he didn’t work for it and is not taking care of it. Don’t tell me every wealthy person “deserves” to be wealthy.

In the quote above, Black Hawk said nothing can be sold but what can be carried away-the difference between personal property and what we refer to as property rights over parcels of land. Tribes had no problem with personal property-it was ownership of the land itself they could not fathom.

National parks are the last oases of the freedom for any citizen to simply walk about in the woods. And even national parks are threatened by privitization bids from corporations. The wealth accumulators will never be satisfied-that is the nature of avarice-and thus must be restrained. Privatizing parks must be prevented at all costs-human beings should not be herded into ever-shrinking corrals.

Not only should parks not be privatized, more parks should be established so that in the future kids can simply walk through the woods freely-and be amazed.

Je' is a writer, artist, and stand up philosopher. She founded and directed two non-profit organizations for disadvantaged children and their families, served as a missionary for three years, is the author of several books and teaches art. Twitter: @jeczaja FB: https://www.facebook.com/grannysavage Amazon Author page: http://www.amazon.com/-/e/B00IU4RWKE
View all posts by Je' Czaja aka Granny Savage »
« Sacred Spaces
When Your Front Teeth Fall Out »