Morning Coffee with a White Supremacist 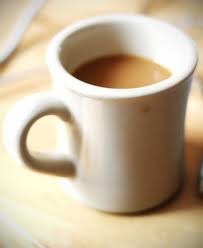 Coffee with a Neo-Nazi

This was the address. I hesitated when I saw the big, burly pickup truck with the rebel flag in the back window. “Is there going to be a problem?” I wondered. “Do I want to rent an apartment from this guy?” I had run into lots of housing discrimination in Deepsouth-not against my snowy-white self, but against my biracial daughter. So I simply never took her with me when I looked for a rent.

I rebuked myself for prejudice. Wasn’t I judging this guy on outward appearance; wasn’t that the same thing I accused the flaming bigots of doing? So I knocked on the door. A big bear of a man answered the door with a growly bear-voice to match. “Hi, I’ve come to look at the apartment?” I ventured.

“Sure, sure, give me a minute,” he growled. I heard heavy footsteps and something being kicked across the room, then bear-man reappeared. He was one of those guys who are not fat exactly, but so big their arms don’t hang straight down but out, like the wings of a penguin. He kept wolves, which were highly agitated by my presence. “Rar-rar-rar-rar,” they barked and growled, spit flying from their impressive mouths. The wolves were restrained by (I thought) an all together too-flimsy kennel.

“SHUT UP,” bear-man yelled, wacking the kennel fence with a broom. The wolves shut up and beheld their master in a friendly manner for about seven seconds, then went right back to ravening at me. “So the wolves aren’t afraid of him. Why should I be?” I thought. I am a big fan of positive thinking, but I have since come to believe it should not be applied in every situation.

I took the rent. My new landlord was Sunny, short for Sundance. Sunny built a bonfire in a permanent firepit outside my place every night and people came over to sit around on rickety chairs and overturned buckets to talk about life. I would say I was invited, but that’s too genteel-it was more than that. I was a newcomer onto tribal territory and if I didn’t participate, I wasn’t a potential member of the tribe, I was an invader.

“Here’s a chance to meet interesting people,” I thought. I must admit, sitting around a fire getting stinky with wood smoke and shooting the breeze, is fun. Regulars included Cece, a blue-eyed Cherokee woman from North Carolina with a blisteringly profane vocabulary, Max, a flirty red-haired mechanic, and Lenny, Sunny’s saggy-pants, reprobate room mate. Various others dropped in now and then so that there were usually about ten people around the fire every night.

When I emerged from my apartment in the morning, inevitably Sunny’s voice growled from his open kitchen window, “Come in and have a cup of coffee.” Since it was more of a command than an invitation and I like coffee, this became a routine. Over morning coffee, Sunny told me his life story.

He had been adopted at age two by a “Celtic” family in the Blue Ridge Mountains. “Irish?” I asked. “No, Celts,” he corrected me. “Celt is a race,” he informed me. “What do they teach you people in college?” “Not that,” I admitted. He had been in some kind of Special Forces but had been dishonorably discharged for beating an officer. Something about honor; honor was a very important value for Sunny. In fact he was on probation for attempting to cut off someone’s head with a sword. “Why a sword?” I asked. This, too, had something to do with honor that I couldn’t quite grasp.

He had worked as a bodyguard in Miami and had hair-raising stories about drug lords and abductions and well, murders. For example, five men had once leapt out of car and started shooting at the person he was guarding, along with two other body guards. The other male was killed instantly by a bullet to the neck, Sunny was hit in his bullet-proof vest and knocked flat and the female body guard shot dead all five attackers. “She came over and started to do CPR on me. I had four broken ribs. If I could have knocked her out I would have,” Sunny said. Apparently bullet-proof vests don’t protect you from all injury, but they do (usually) protect you from getting a big hole blown in your chest.

His bodyguard career ended when an “enemy” ran over his head with a motor cycle. This was not good for his head, but then he fell three stories off a roof and fractured his skull. This, as you can imagine, affected his health and led to his current much-reduced income.

Sunny and many of the tribe belonged to Aryan Nations. I just listened and asked stupid questions, like “Do you guys like Hitler?” Short answer, “Yes.” Furthermore, Hitler was not dead. He had sat on the Stone of Scone as Russian troops advanced and been transported to a dimension suitable for him.

The United States had treacherously elected a black president a few months earlier and this was a sign that the Race War was about to start. Therefore, they had bought up all the guns and ammo they could get their hands on. When gun shows ran out and ammo was rationed to 1,000 rounds per customer, they recruited their aunts and grannies to go buy another 1,000 rounds. I told them I saw no sign of an impending race war from the black side. They explained that blacks had been planning the war for a long time, were highly organized and heavily armed. I told them I knew that blacks were NOT so organized.

They told me black fathers taught their sons to get white girls pregnant, in order to dilute the pure Aryan blood and destroy the world. Jews were involved; the brains behind the plot. “Sunny,” I asked, “Didn’t you say you were adopted?” “Yeah, so?” he answered. “Maybe your biological parents were Jews,” I suggested. Having dropped this pint of gasoline into the fire, I left to let them sort it out.

Despite my stupidity, I was invited to the Aryan Nations Christmas party. Oh yeah, they were dreaming of a white Christmas. I had never met a lot of these people, but I figured it would be a learning experience. Sunny announced that the police were following him. “What makes you think that, Sunny?” I asked. “When I drive back to the house, most of the time a cop is right behind me.” “Do you think the fact that the sheriff’s department is down the street could have anything to do with police going down this road?” I asked. He did not. He was being followed and monitored constantly.

I contemplated crossing a bridge and getting to heck away from these people. But maybe I could talk some sense into them. After one guy told a joke about “killing niggers” I got nauseated, as I often do in the presence of evil. Now I was definitely going to throw up. I looked for a waste basket.

“I’m not feeling well, I’m going home,” I said and staggered out the door. “That’s your damn chicken wings, Rupert,” I heard as I made my exit. Three party-goers were smoking weed in a pickup truck. I hoped the passing cops didn’t stop to investigate.

Next morning I emerged from my place and heard, “Come in and get a cup of coffee.” I try to be honest at all times. I had to tell Sunny I was moving out. I did. “You can’t move,” he growled. “My rent is paid for next month. You can just rent it to someone else and you’ll come out ahead,” I suggested. “No, you can’t move,” he said, “Why do you want to move?” he asked. How honest should a person be?

“Because I’m scared of you,” I said honestly. This appeared to hurt him deeply. “Why would anyone be scared of me?” he wondered. “Because you tried to chop off a guy’s head and you plan to blow up the neighborhood and now and then you go outside and cuss a blue streak and threaten to kill people and throw logs around,” I said.

That don’t mean nothing,” he said. “That’s only when I run out of medication.” “You can’t move,” he said. “I need you to keep me straight.”

A few days later, I seized an opportune moment and escaped. Sunny left messages on my phone, first begging me to come back, then threatening dire consequences if I did not.

Now and then a news story appears describing paranoid right-wing guys who shoot people, take hostages or try to take down the U.S. government. Most Americans think such people are few and far between. I think there are many more than people realize.

When Homeland Security tried to issue a report on right-wing domestic terrorists, the report was suppressed. Now with the gun debate heating up again, I know they are buying up all the weapons and ammo they can lay hands on, because the traitorous government is coming to disarm them, and they intend to go out with honor.

Je' is a writer, artist, and stand up philosopher. She founded and directed two non-profit organizations for disadvantaged children and their families, served as a missionary for three years, is the author of several books and teaches art. Twitter: @jeczaja FB: https://www.facebook.com/grannysavage Amazon Author page: http://www.amazon.com/-/e/B00IU4RWKE
View all posts by Je' Czaja aka Granny Savage »
« Blingism: A Do-it-Yourself Bible Doctrine
Booty-full Women? »

4 thoughts on “Morning Coffee with a White Supremacist”